Welcome to the Nintendo Palace!

Evil Clefairy are out to get me! =(

Evil Clefairy are out to get me! =(

It's really gay and stupid. And I like making people laugh. It's fun and makes me feel good about myself so here it is. @_@

And
it was really gay. They're a girl Pokemon already altough somewhat cute
you know. Having them in your dream if you're a guy is really... WEIRD.
Imagine telling friends you had a dream with Clefairy. You'd be beat up
and ridiculed.

Anyway I was playing Go Fish with them. And
they were all nonstop giggling... @_@ I think I was losing. Don't know
why it was Go fish. There were Poker chips on the table... o.o And all
of a sudden they leaped up onto the table then started prancing around
the room slowly chanting Clefairy like some kind of cult. @_@ *about
ten or 12 of em... XD

And then they grabbed my hand and tried to
make me skip with them. @_@ And some ran up to me with those flower
necklaces and tried to give em to me. I was like no thanks. Then the
Clefairys all stopped dancing, turned and stared at me angrily. I was
like... ****.... Then they formed a circle around me and pouted. One
seemingly the leader walked up to me and attempted to give me the
flower necklace again. I was like no thanks I don't want it. You keep
it. D=

It jumped backwards to reform their circle. And they
all held hands. O.o Their eyes all lit up red 0_o and then they all
shot laser beams at me before charging and pounding the crud out of me.
@_@ And some of them brandished Tomahawk things with sharpened
moonstones and stabbed me repeatedly. O.O

I screamed "FINE! I'll
take the dang flowers!" and raised my arms. I was all bloody and
bruised and had my right leg broke. D= Anyway the leader raises her arm
like to signal "CEASE! " and motions to another Clefairy. That one
rushes off and returns with the flower necklace and puts it around my
neck. I'm all trembling and the leader and the others reform the circle
around me and dance around in a circle holding hands jumping up and
down. O.o

And I'm already scared out of my mind. And suddenly
the Clefairy leader she stares at me and sends me a telepathic message.
"We're friends 4EVER! You can NEVER leave us. >=)"

And I start screaming nonstop crying and the Clefairy all begin to giggle.

"Whenever there is a meeting, a parting shall follow.But that parting needs not last forever. Whether a parting be forever or merely for a short while... that is up to you." ~Happy Mask Salesman 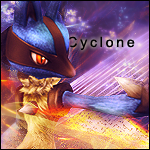 Cyclone wrote:I remember this dream! I read it on Nsider and I died laughing!

xDD Exactly where I copied and pasted from. =3 XD It's discussion worthy to be re posted on another site.

And my dream last night was weird. Only thing I remember was walking in a swamp on a dock, trees on both ends of the swamp, like I'm in a middle of murky somewhat visible through water, mainly you can just make out shapes. And my twin sister I suddenly turn around cause I heard a splash and she's marching through like knee deep water trying to catch "a fish", a brown mass I make out to be a horseshoe crab. 0.o And she wants to kill it and leaps up and jumps on it. And I see red slowly leaking out below it. And she marches off to get back on the dock at the start. And suddenly it gets back up and I'm like O_o. And it starts following her and I'm like "IT'S MAD! RUN! RUN! RUN!" XD and she's like trying to swim with a horseshoe crab hovering towards her in the water XD. only thing I remember from that

other thing was I was on a bus with random people and on the radio "I don't wanna miss a thing" was playing by aerosmith but it wasn't them. And I'm like "This isn't Aerosmith." and ask who it is. And everyone is all "Aerosmith never sang this you idiot." and I'm like YES THEY DO. T_T and we're arguing the whole time. Stupid idiots.. <_<

I ahve ahd weird dreams too. One time my old elementary school was being taken over by Zombies. Everyone was running away. Since I have allergies I turned towards one and acciently sneezed! It then turned into a cute fluffy bunny. So, I realized sneezing on them was their weakness and everyone begane sneezing to turn them into cute fluffy animals.

Another one I dreamed I was Ness in Earthbound and I wanted Psychic powers. I needed Paula to teach me, except she didn't know how. Somehow we all ended up in a cooking pot and we finally got out and I stubbed my toe and it grew 40 feet long. Even better it gave me psychic powers. Then some random toe doctor appeared and said that it was the longest real toe he had ever seen.

"Whenever there is a meeting, a parting shall follow.But that parting needs not last forever. Whether a parting be forever or merely for a short while... that is up to you." ~Happy Mask Salesman